The end of an era: The 2023 Aston Martin V12 Vantage is the last of its kind, strictly limited, and faster than ever. It doesn’t come as a roadster, only as a coupe. The price? Her Majesty’s Secret!

An Aston Martin V12 Vantage will be leaving in 2022 for the last time the production halls in British Gaydon – in a strictly limited series of only 333 pieces. The technical data of the 5.2-liter twelve-cylinder engine are given as 700 hp (515 kW) and 753 Newton meters.

The switching work is done by an eight-speed automatic, whose racing software is intended to achieve switching times on double-clutch level. A mechanical differential lock distributes the power to the rear wheels. Equipped in this way, the rear-wheel-drive Aston should be able to sprint from zero to 100 km/h in 3.5 seconds. The propulsion only ends at 322 km/h.

The torsional rigidity of the Vantage has been improved for better handling. Adaptive dampers and an additional spring set on the rear axle should ensure the best possible compromise between performance and comfort. The standard scope also includes the carbon-ceramic brake system, which can withstand temperatures of up to 800 degrees Celsius without fading. In addition, customers of the Aston Martin V12 Vantage (2022) can choose between two exclusive 21-inch rim designs. Michelin Pilot Sport 4S sports tires are always factory-fitted.

So that the performance of the 2023 Aston Martin V12 Vantage is immediately recognizable from the outside, the British have widened the body and track of the coupé by 40 millimeters. A front splitter is emblazoned on the front bumper. In addition, the air intakes have been enlarged and the hood has been expanded to include an air intake.

The rear also offers exclusive details: two tailpipes are located in the middle of the diffuser. A large spoiler, which generates up to 204 kilograms of contact pressure at top speed with the further aerodynamic adjustments of the V12 Vantage, rounds off the package. Of course, the interior also gets an exclusive V12 paint job: leather-covered carbon sports seats are standard.

The further and already familiar interior can be adjusted according to the customer’s wishes. Incidentally, something that also applies to the exterior. All 333 planned 2023 Aston Martin V12 Vantage units have already been reserved since the announcement in December 2021. The waiting list is full, the price is unknown and a V12 Roadster is out of the question. 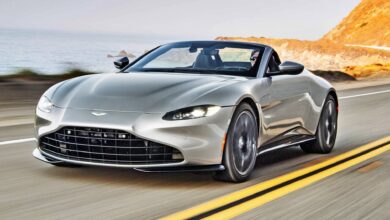 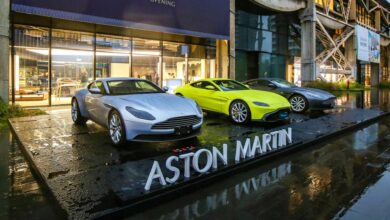