Next year will come loaded with electrical innovations for Hyundai. The Korean firm, which is enjoying considerable success with models such as the Kona Electric or the IONIQ 5, will expand its zero-emissions range with the arrival of new and interesting proposals that will allow it to further strengthen its position in the European market.

Next spring, Hyundai will begin deliveries of the IONIQ 6, an aerodynamic sedan set to challenge the Tesla Model 3. This 4.86-meter-long sedan sits on the E-GMP platform, so it has an 800-volt system that allows it to charge at powers of 239 kW in direct current (10-80% in 18 minutes).

Available with two battery packs (53 and 77.4 kWh), the IONIQ 6 offers a range of 614 km WLTP, something that is possible thanks to its Cx of just 0.21. Of course, rear-wheel drive and all-wheel drive versions will be on the market; In addition, a high-performance N variant will be added later, which will be around 600 CV of power.

Everything indicates that next year we will also see the expected IONIQ 7, a large SUV with seven seats equivalent to the Palisade (4.98 meters long) that will also make use of the E-GMP platform. Although initially it will be sold in the United States, later it should also reach Europe. To exceed the 483 km EPA range, it will mount more capable batteries than the IONIQ 5 and 6.

The electric Hyundai Casper will start manufacturing in mid-2023

Another important novelty will be the second generation of the Kona Electric, which will grow to 4.36 meters in length and will adopt the design language of the Grandeur and Staria. At the mechanical level, no relevant changes are expected compared to the current model, since it will equip a 204 CV (150 kW) and 255 Nm engine associated with a 64.8 kWh pack. Its autonomy will be close to 500 km WLTP.

Hyundai’s big star for 2023, however, will be the electric version of the Casper, a tiny 12-foot-long crossover currently on sale in South Korea. This model, which boasts a highly modular interior and a 301-liter trunk, will begin manufacturing in the middle of next year.

Andreas-Christoph Hofmann, Hyundai’s marketing manager in Europe, confirmed at the time that his target price is 20,000 euros, making it one of the most affordable electric cars on the European market. BorgWarner will be in charge of supplying the propulsion train, which will integrate the permanent magnet electric motor, the inverter, and the power electronics in a single unit. 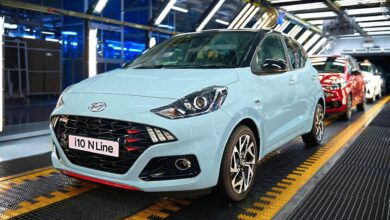