DS is already going from strength to strength as its brand, with its designs and models and not in existing Citroën recreations. In fact, with the arrival now of the DS 4, there will be four cars, let’s say, ‘own’ (counting among them the DS 9 that is not yet among us).

The DS 4 is the one that will complete that ‘poker’ and, surely, it will be one of the great protagonists in the sales chapter. Regarding the previous model, it has now been transformed into a ‘crossover’ coupe that conveys elegance and luxury. Of course, it will offer a high degree of electrification in its mechanics and will have three finishes.

The new DS 4, whose commercialization is scheduled for the last months of 2021, has bet heavily in terms of design. Its image reminds us from the first look at the DS Aero Sports Lounge concept and not only in its lines but also in the formula of the ‘crossover’ coupé.

The DS 4 2021 is a car with a raised body but with a sporty drop at the rear. It measures 4.40 meters long, 1.83 meters wide and 1.47 meters high, highlighting the enormous size of the wheels, which can be up to 20 inches, with a faired design, and that gives it an even more athletic image.

It is a little taller than the first two rivals that come to mind: the Audi A3, the BMW 1 Series, or the Mercedes A-Class. It is almost identical in proportions (just two centimeters higher) to the Kia Xceed; a little narrower, but with 1.54 meters of height we find the Mazda CX-30 or the Cupra Formentor -other possible references-, while the Lexus UX is longer (4.49 meters) and higher (1.54 m ). The Mercedes GLA or the BMW X1 is more SUV.

The aesthetic stamp of the car is neither disruptive nor ostentatious, but it is attractive and very recognizable. On the front, we find directional matrix lights and the vertical daytime running lights consist of 98 LEDs each. The grill, depending on the versions, can have three-dimensional elements with the diamond shape that is used so much, sometimes with more success and others with less, the French brand of Stellaris. The rear is the most successful part, with a muscular, almost sporty presence. Already seen in other models of the house, the door handles are integrated into the bodywork and unfold only to open them.

On these common elements, the DS 4 will be offered in three declensions with minor differences in style. On the one hand, the ‘normal’ model recognizable by the black roof and the numerous chrome. Then there is the so-called Cross, with an image of an SUV, roof bars, and body protections, apart from the fact that it will be the only one that can have the Advanced Traction Control system as an option to improve traction, with sand, snow and mud modes. , in addition to descending slopes. But it will not have more ground clearance than the rest (about 18 cm) and a 4×4 version is not planned either. Finally, those who like a more dynamic image will have the 4 Performance Line, with a black exterior finish and characteristic wheels, plus a unique interior.

The interior is quite different from the already known DS. Much cleaner and more minimalist, it has distinctive details with very fine aerators (invisible says the brand) in the central area of ​​the dashboard, while the sides are in the union of this with the doors.

We find the two already common digital screens, a smaller one for the instrumentation and another of more than 10 inches in the central part, which houses almost all the functions except a few related to air conditioning and which are grouped in a row of piano-like keys. DS says that it has significantly improved its operations and the software that they had been using until now was already asking for it.

The big news is a small five-inch touch screen, placed in the center console, just ahead of the automatic gearbox controls. Thanks to it, we can give orders to the car through gestures, if you zoom or reduce it. It also recognizes writing. Man-machine communication is completed with a voice recognition system with a much finer ear that learns from the user.

As is a tradition in the French house, the client can choose between different environments, mostly two-colored and very careful thanks to the use of leather, Alcantara, wood, forged carbon, etc. And as a first for this model, the seats feature a new morphology in the brand, in the style of a shell that surrounds the body without cutting areas. And also as a sign of elegance, instead of showing them, the seams of the leather both on the seats and on the doors or the dashboard are barely noticeable. Indirect ambient lighting is customizable.

Technically, the DS 4 uses an evolution of the modular EMP2 platform already used by the DS 7 Crossback, or by numerous Citroën and Peugeot models. It provides up to 70% of new or exclusive parts and will allow having plug-in hybrid versions, numerous driving aids, and even a Head-up display system with augmented reality from the start.

Although in DS they emphasize that it has allowed integrating these elements with a body that stands out for the large proportion that the wheels occupy and the (relatively little) glass surface. It is also a lighter platform and thanks to the work done at the level of gluing parts, suspensions, or steering, the car has been made more rigid, efficient, and comfortable.

By the way, 30% of the mass of the car is made of renewable or recycled materials, as is the case with the dashboard, made of 20% with hemp (in its non-visible part), or polypropylene, polyester fibers, and elastomer that are used under the chassis as deflectors, noise reducers or supports.

The mechanical offer does not present new features, beyond the improvements introduced in each case. This is the case with the star of the range, the petrol-electric plug-in hybrid variant with a maximum combined power of 225 hp and which, thanks to a new battery, promises a range in electric mode of more than 50 km. And it does not reduce the capacity of the trunk, depending on the brand. Also, this variant will have specific 20-inch wheels from the start, semi-fared to be more aerodynamic and 1.5 kilos lighter.

Those responsible for DS claim that there will not be a 100% electric variant because the customers of this car demand a great autonomy that that technology still does not guarantee. The issue also has to do with the fact that the platform of this model does not support it, which is the case with the DS 3 Crossback.

In the pure part of combustion engines, there will be gasoline versions of 130, 180, and 225 horses and diesel of 130 horses. All, always with the well-known eight-speed automatic transmission and of such good operation. In these models, the recommended rim will be 19 inches and the wheels may be All season with winter certification that allows you to do without the chains.

In principle, nothing is known about the prices, although considering the current rates for the DS range in Spain they should start at around 30,000 euros, a figure that probably excludes extras such as the information projected on the windshield. It uses augmented reality to display data such as speed, driving aids, navigation, and warning messages, or even the song you are listening to or the incoming call. The driver visualizes them as if he were looking at a 21-inch diameter screen positioned four meters ahead of him on the road. Also, all multimedia functionalities or those related to navigation will be updated in real-time through the cloud.

The semi-autonomous driving or level 2 (can not be removed from the hand’s wheel) is already present in the DS other, but in the DS 4 has been improved. It is cruise control that adapts to the speed of the traffic, capable of managing traffic jams and keeping the car within the lane, for which it adds new functions such as semi-automatic overtaking (it must be indicated with the indicator) or speed adjustment in curves. To do this, it has sensors, radars, and cameras that record everything that happens inside and outside the car and analyze it in real-time thanks to artificial intelligence. The system, for example, is capable of monitoring the so-called ‘dead angle’ at distances of up to 75 meters.

This surveillance system continuously scans the road and is the basis of a suspension, unprecedented in the segment, that anticipates irregularities to adapt to them and maximize comfort. This device was already released by the DS 7 Crossback, as well as the night vision camera that detects pedestrians and animals up to 200 meters at night and warns the driver of their presence, both in the instrument panel and in the Head-up Display.

Finally, the new matrix lighting consists of three LED modules. The interior serves for the crossover function. The del can rotate through an angle of up to 33.5% degrees, in the style of the 1967 DS turn signals. And the exterior is for the high beams. The set adapts to traffic conditions, steering wheel angle, speed, and weather conditions, with five preset modes: city, country, highway, severe weather, and fog. They also allow long-distance driving without dazzling those coming from the front. 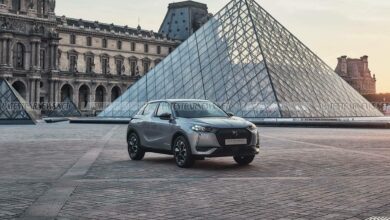