The DS 9 was to be one of the big novelties of the Geneva Motor Show 2020 which should have opened its doors to the international press on Monday. Unfortunately due to Coronavirus, it has been canceled. It was therefore finally in a studio in the Paris region that we were able to preview DS’s new flagship.

To build its new range, DS was not crazy. He followed the logic of the market and therefore gave priority to SUVs! He unveiled the large DS7 Crossback in 2017 and the small DS3 Crossback in 2018. But to establish its high-end image, DS knew it had to place itself in the large sedan market. Its third model is therefore a road.

Before leaving his post, Yves Bonnefont, former director of the brand, explained that sedans still had many followers in certain markets, notably China, which is the priority of this vehicle. But he stressed that “even in Europe, there are still people who like the elegance of a beautiful sedan”.

From the first glance, we notice all the aesthetic gimmicks dear to DS. There is a large front grille whose chrome contours extend towards the 100% adaptive LED optics and air intakes. One of the peculiarities resides in this chrome guilloche ring which cuts the hood in two. The daytime running lights are very similar to those of the DS3 Crossback while the rear lights are reminiscent of those of the DS7 Crossback but thinner.

At the level of the profile, we notice the presence of retractable door handles. The DS 9 adopts a fastback-type silhouette, with roof arches that stretch far towards the trunk, which appears shortened accordingly. Those nostalgic for the brand will have noted the nod to the first DS with position lights at the top of the bezel.

Inside, DS is also playing the cost control card, taking over a good part of the dashboard of the DS7. Before crying out loud, we stress that the practice is more and more common, even among German premiums.

We are therefore in familiar territory for the presentation. The driver will have in front of him a massive dashboard, very vertical but fully covered with stitched leather. In its center, a 12-inch multimedia screen overlooked by the watch, still from the watchmaker BRM.

The instrumentation is 100% digital with a 12-inch screen as well. As is often the case with DS, the materials are qualitative with leather, Alcantara (roof and sun visor, but also certain specific finishing details such as the pearl point, the guilloche pattern, or the upholstery like a watch strap.

Based on the EMP2 platform, which was used in the Peugeot 508L, the Chinese version of the new 508, the DS 9 benefits from a generous wheelbase of 2.90 meters, which is larger than that of a Mercedes Classe E. Enough to guarantee excellent rear roominess, particularly in terms of legroom. Best of all, the rear seats are heated, massaged, and ventilated. A large central armrest can be unfolded, it incorporates USB sockets and certain controls. This habitability does not hamper the loading volume since it reaches 510 liters. Be careful, this is a trunkless practical daily than a hatchback, but a classic for the category.

To reinforce the concept of comfort, the DS 9 is equipped with the DS Active Scan Suspension: the controlled suspension receives information from a camera that analyzes and detects road defects. Acoustic laminated windows are also part of the game. In the list of equipment, there is also level 2 semi-autonomous driving, which operates at up to 180 km / h, the night vision system, access by smartphone… The composition of the range will be traditional with 4 trim levels: Bastille, Opéra, Rivoli, and Performance Line.

Under the hood, the DS 9 will be available with 4 engines: petrol, the Puretech 225 hp, and three plug-in hybrid versions. To begin with, there will be the 225 hp (180 hp + 80 kW) two-wheel-drive configuration. Equipped with an 11.9 kWh lithium-ion battery, it will be able to travel between 40 and 50 km entirely electric. There will then be a 250 hp variant (200 hp + 80 kW) with a larger battery and above all a third version, four-wheel drive, with a second electric unit on the rear axle, which will develop a cumulative 360 ​​hp! No diesel on the menu, however. 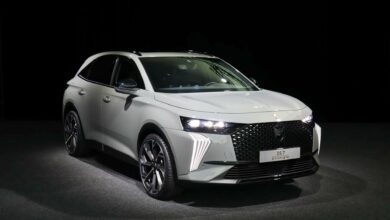